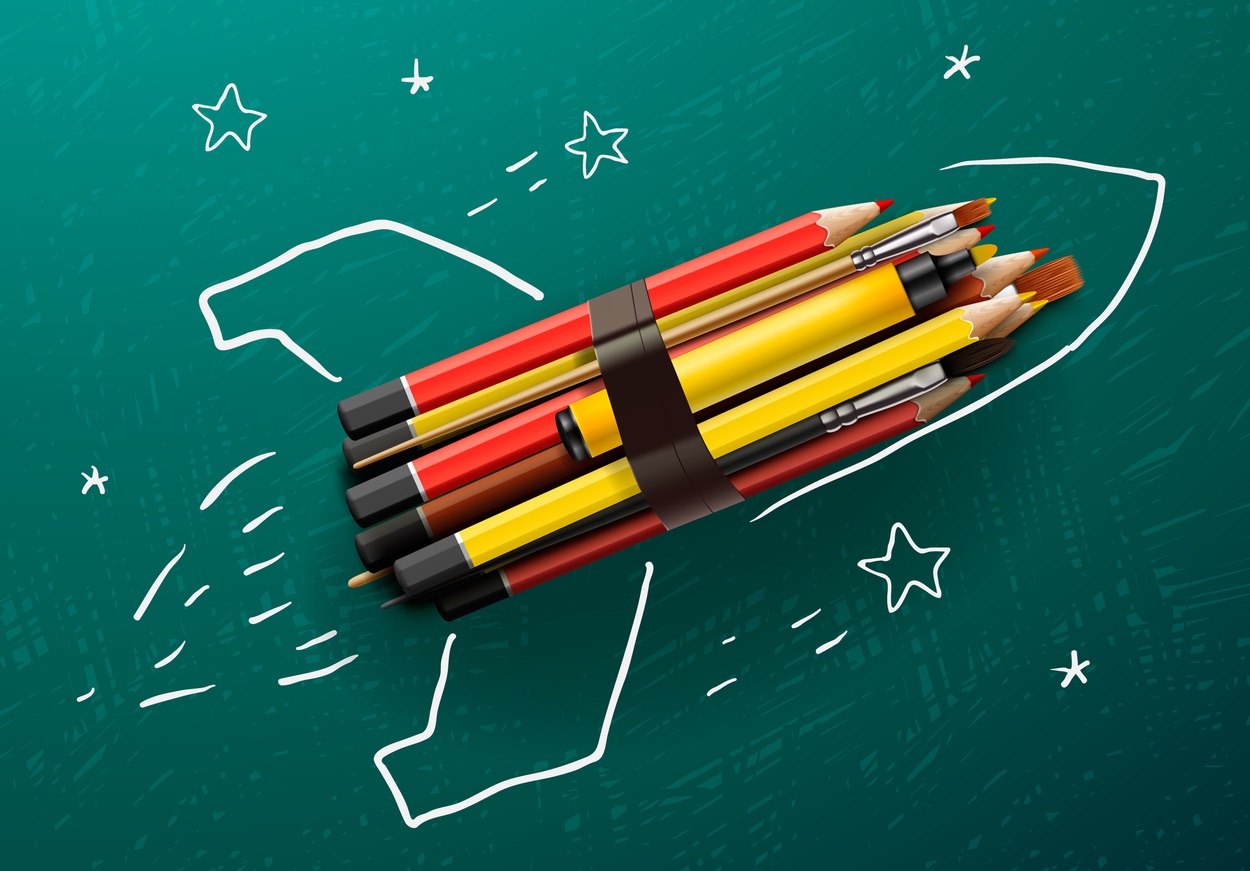 Managing Creativity AND Productivity: 5 Tips for Founders and Leaders

Creativity and productivity usually don’t go hand in hand. Designers tend to procrastinate. Musicians like to party like rockstars. Flashes of genius don’t happen between 9 am and 5 pm. But you have a company to run. You need some rules to keep things on track. Results to present to investors. Standards to avoid the entire operation falling into chaos. And you can’t keep making exceptions for the designer who only shows up when it pleases him. Welcome to the fine art of managing creativity AND productivity. “Creatives” (sorry creative people, can’t come up with a better way to catch you all in one word) tend to dislike authority, have problems concentrating and reach peak performance at the strangest of hours. These traits run contrary to the goals of a manager and get amplified by most office environments and rules. If you’re a founder or manager who has to work with creatives, you'll need to walk a fine line between order and flexibility. Here are some tips and ideas on how to do just that.

1. Take a bottom-up approach to tools

Would you tell a blacksmith which hammer to use? Or Tiger Woods with which club to swing his next shot? Right, I thought so. Then why do managers dictate which tools the team should use?

Rarely do we see a bottom-up approach when it comes to picking (productivity) tools. Doesn’t it make more sense if those doing the “real” work are able to choose the software they want to use? This holds especially true for creatives, who passionately hate being forced to work with software that sucks (and rightly so).Instead of making your job easier by picking a tool which saves you time, let the team use the tools they want. You then figure out how to incorporate that into your workflow, instead of the other way around. I’m currently working with a content marketer through Basecamp, our product designer through email and on another project using Asana. Would I rather have everything in one tool? Of course, but I want them to do great work. Allowing the team to use the tools they like speeds up their workflow (and motivation), so I’m happy to go the extra mile to accommodate them. The exception to the rule There can be some exceptions to this rule, because you need synchronization across an entire organization for certain processes (finance, knowledge sharing, communication). But with tools such as Zapier readily available to sync data between almost any two applications, the list of exceptions is shrinking by the month.

Ideally you don’t measure hours at all. If the job gets done well and before the deadline, who cares whether it took someone five minutes or 36 hours? But if that’s too radical for you and time accountability is still necessary, at least try to get rid of office hours, especially for creatives. Measure blocks of focused work instead, regardless of whether they happened at 9 am on a Saturday or in the middle of the night on a Wednesday. Let someone aim to complete 70 Pomodoros (blocks of 25 minutes) in a week, as opposed to showing up in an office for 40 hours at set times. When (and where) those blocks get done doesn’t matter. Creativity and motivation can’t be planned between 9 and 5. And if time-tracking is still a concern, there are plenty of tools out there which can do that (including our upcoming product), regardless of the physical location where the work gets done.

I’ve said it before and will say it again: multitasking doesn’t work for 97% of people. Unfortunately, the more you do it, the more you think you’re good at it: “You’d think people would realize they’re bad at multitasking and would quit. But a cognitive illusion sets in, fuelled in part by a dopamine-adrenaline feedback loop, in which multitaskers think they are doing great."- Daniel Levitin in "The Organized Mind "Keep this in mind when expecting your creative team members to “get better at multitasking”. Instead of bombarding them with multiple projects and unclear priorities, spoon feed them what needs to be done next, one priority at a time. A great manager “babysits" creatives when it comes to priorities and helps them avoid the multitasking trap. This way they can use their entire mind for creative work, not prioritization issues.

Barry Schwartz mentioned it in his TED talk The Paradox of Choice: "we all need a fishbowl". With work and leisure having become always available and most things close to free (communication, gaming, music), there are no natural boundaries anymore to the choices we have. This leads to endless distraction, feelings of exhaustion and “decision paralysis".

The fishbowl analogy can provide a solution: we need to limit the amount of choice and distraction in our lives. This means using digital tools to block distracting sites, but also creating a work environment that fosters flow. Too often, offices are run on the rhythms of management, not those of creatives and developers. The latter prefer long stretches of time to get into a mode of sustained concentration, while the former don’t think twice to schedule a meeting at 10:30 am or 3 pm (disrupting the workflow of the team).Consider some of the following steps to help your team members build their fishbowl:

Motivation greatly affects productivity, it is known. And what influences motivation? Well, for one, praise. Especially when it comes to creatives. Just like there are some sales people who are driven by altruistic reasons, there are some designers who don’t care about their creations and are only in it for the money. In most other cases, creatives are passionate and emotional people, highly sensitive to feedback on their work. This doesn’t mean all comments have to be positive, but at least some sincere acknowledgement of their efforts goes a long way. Too often, sales people and managers dealing with a designer, completely surpass to show appreciation for their work. They just take it and rush off to the client, to be able to send their invoice, or at least move the project to the next milestone. This is the surest way to undermine your relationship and sink the motivation of your colleague. A well-meant thanks. A comment about something you like. Appreciation for the all-nighter to finish the work on time. Small gestures and little effort, but it works, just give it a try.

Other resources and further reading

Hopefully the above five tips will help you foster creativity and productivity in your team, but this was only the tip of the iceberg. There are many other resources and further readings on the crossroads of creativity and productivity. You’ll find a small selection to help you on your way below.99U"At 99U, we deliver the action-oriented insights that you didn’t get in school, highlighting real-world best practices for making ideas happen." “How Do People Get New Ideas?”, a 1959 Essay by Isaac Asimov on Creativity. "A person willing to fly in the face of reason, authority, and common sense must be a person of considerable self-assurance. Since he occurs only rarely, he must seem eccentric (in at least that respect) to the rest of us. A person eccentric in one respect is often eccentric in others. Consequently, the person who is most likely to get new ideas is a person of good background in the field of interest and one who is unconventional in his habits. "Why broken sleep is a golden time for creativity" Sleep patterns of the past might surprise us today. While we might think that our circadian rhythm should wake us only as the sun rises, many animals and insects do not sleep in one uninterrupted block but in chunks of several hours at a time or in two distinct segments. Ekirch believes that humans, left to sleep naturally, would not sleep in a consolidated block either. "Digital Storytellers: How One Production Company Is Working To Build A Creative Utopia" Media Monks has created a system that allows its people to focus on creativity. 'We don’t register working hours, so people don’t bill their hours to a project. That’s something that’s not part of our model, which means it frees up people to be creative and ambitious instead of looking at how many hours they have left to spend on their projects.' "Devoted to Distraction" Far from being a worthless distraction, daydreaming seems to be an essential human activity. It's the spontaneous thoughts we have while doing it that make us feel vibrant, aware, and engaged. Daydreams help generate our sense of self, and may even be a key to consciousness. "Pixar’s Creative Process Will Help You Produce More Innovative Content" When we watch a Pixar movie, we see a great film with a great story. It is easy to label it as “innovative” and “creative” without realizing the painstaking process that went into making something that started out not-so-great into something truly great."